Touch features Steve’s covers of a wide range of songs, in string-based arrangements by Bingham himself and long-standing collaborators Phil Toms and Rowan Alfred.

“Touch” is a 10 track covers album by world-renowned eclectic violinist Steve Bingham, released on 21st May 2021.

Touch features Steve’s covers of a wide range of songs, in string-based arrangements by Bingham himself and long-standing collaborators Phil Toms and Rowan Alfred.
Steve writes; “I wanted to release some of the music I had used for videos on my YouTube channel, alongside some new covers, in particular a version of Signal To Noise by Peter Gabriel. I’ve remixed all the tracks, and in many cases completely re-recorded them too, working with sound engineer Mark Fawcett. I’ve been joined on the journey by some superb musicians, including the members of my own string quartet, along with the amazing Chris Brannick on percussion, John Jowitt – prog bassist extraordinaire! – on bass guitar, and my daughter Jennifer Bingham on vocals. In many ways this album is my response to lockdown: Many of the musicians recorded at home for me, and several of the tracks reflect the difficulties we have all faced over the past year, including loneliness and depression.” 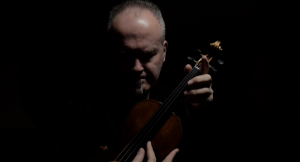 Four of the ten tracks are completely instrumental versions of the songs, two use backing vocals, and four have full vocals. This is a departure for Steve, as all his previous solo albums have been fully instrumental.
“I guess the vocal element came about a little by accident”, Steve writes. “Rowan had written me an arrangement of Such Great Heights by The Postal Service, and when I recorded it I felt that it really needed vocals and so I asked Mark Fawcett to provide these. I loved the result and wanted it on this album, and this opened the way to a few more tracks with vocals!”